Time to Make Some Choices in Norwegian Gender Aid? 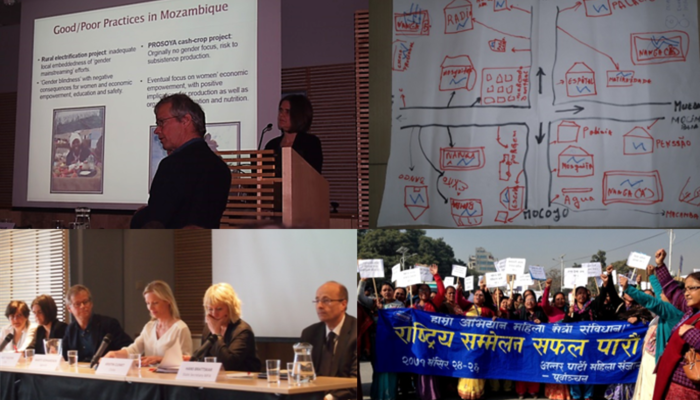 This was the question asked at a recent high profile event where SIPU's evaluation of Norway’s support to women’s rights and gender equality in development cooperation was presented and discussed.

The launch event was held on the 13th of May at Norad in Oslo and attended by an audience of about 100 distinguished Norwegian policy-makers, academics, practitioners and evaluators. The evaluation, conducted by SIPU, in collaboration with the Overseas Development Institute in the UK and Chr. Michelsen Institute in Norway, was presented by Nicola Jones from ODI and Inge Tvedten from CMI. A panel discussion followed, which included Deputy Minister Hans Brattskar from the Norwegian Ministry of Foreign Affairs, Kristin Clemet from the liberal think-tank Civita and Marte Gerhardsen from the social democrat think-tank Agenda.

The evaluation assesses Norway's support to strengthening women and girls' rights and gender equality through its development cooperation; the extent to which results have been achieved and whether they are in line with the Action plan for Women's Rights and Gender Equality. The evaluation included a desk study of on the global dimensions of Norwegian development cooperation's support to women's rights and gender equality as well as three in-depth country case studies including Ethiopia, Mozambique and Nepal. In addition, a desk study of Norway's gender aid to Zambia was conducted.

The evaluation finds that Norway's support is a mixed bag of strengths and weaknesses. Where Norway shines is for instance in its focus on long-terms support, which is vital for changing deeply entrenching social norms that reinforces inequalities, its strong linkages with civil society and its willingness to think 'outside the box'. However, Norway appears to be underperforming in terms of a lack a clear logic and evidence base around how to support women and girls' rights and what really works, and a lack of a proactive role in donor/government groups at country level.

The presentation led to a lively panel discussion. All three panelists discussed the need for Norway to work in a much more focused way to ensure that its support is spread less thinly. However, the panelists disagreed on what this should mean for Norway's support for women's rights and gender equality.

From an official standpoint, Deputy Minister Brattskar said the aim of the government will be for  Norway to focus support in fewer countries, but that gender should be a central part of Norway's development cooperation, particularly in the area of girl's education. The key point about moving to work in a less fragmented way and more focused and strategically, however, is that everyone wants to concentrate, but no one wants to be concentrated, he noted.

Kristin Clemet had a different perspective and suggested that Norway cannot work in all areas, and should be careful not to be too paternalistic in its support for gender, for instance, in terms of LGBT rights. She suggested Norway should instead focus on demand-driven aid in areas such as infrastructure, health and education.

The event featured in Bistands Aktuelt here (in Norwegian).

To read the report and the policy brief, please visit the Norad website here. You can read more about SIPU's evaluation services here.